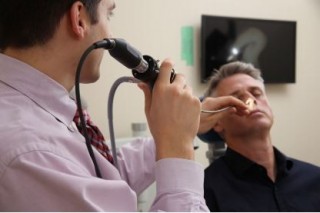 Do you sometimes have trouble breathing through your nose? It’s not an uncommon problem, as this issue affects people of all ages ­ from toddlers to adults. It is important that the mechanisms behind breathing through your nose work flawlessly most of the time, as the nose serves to filter, clean, humidify, and warm the air we breathe. Here are the three most common causes of nasal obstruction.

The inferior turbinates are just inside the nostrils, and these nasal structures are responsible for creating the nasal cycle, directing airflow within the nose. Sometimes, these structures swell with blood to constrict the nasal passages and shrink back to their normal size to increase air flow. There are reasons for the turbinates to become unnaturally swollen, including the common cold, gravity, and predisposition to large turbinates that causes even the natural swelling of the nasal cycle to restrict too much airflow ­ called Inferior Turbinate Hypertrophy. Treatment for Inferior Turbinate Hypertrophy can include decongestants and nasal sprays as well as surgical procedures that can range from a minimally invasive method of shrinking soft tissues, to removing portions of soft tissue and bone, to removal of the entire inferior turbinate (in extreme circumstances).

A deviated septum occurs when the cartilage at the center of the nose ­ called the septum ­ is uneven, resulting in one nostril being larger than the other. A deviated nasal septum can cause complications including a blocked nostril or difficulty breathing. The most effective treatment for a deviated septum is surgery, called a septoplasty, in which the deviated cartilage or bone is removed ­ which straightens the structure and relieves the obstruction. Depending, on the location of the deviation, a rhinoplasty technique (also referred to as plastic surgery) may be necessary to reconstruct the supporting mechanism at the tip of the nose.

If you are having difficulty breathing through your nose, a comprehensive nasal exam is necessary to get to the root cause. Call Ashford Clinic at 706-­248-­6860 to make an appointment for relief for your nasal obstruction.

Do I have Allergies, a Sinus Infection, or a Summer Cold? Adults and Ear Infections Should I Keep Taking Allergy Meds in the Summer? Tips to keep your Ears, Nose, and Throat Healthy this Summer Summer Allergy Survival Guide