“I've been to other ENTs in Athens and he is by far the best in town!”

Having trouble breathing through your nose? 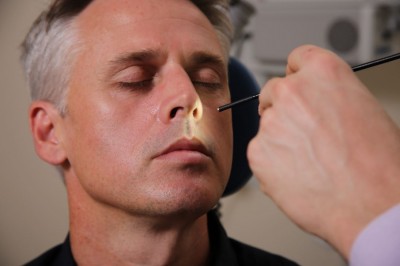 This may sound obvious, but human beings need to breathe through their noses.

Sure, we can breathe through our mouths. That’s a good backup to have when we get a cold or we need a little extra air to make it up a steep hill. However, there are benefits to breathing through the nose, so we want it to work flawlessly the majority of the time. If that’s not the case for you, you may suffer from nasal obstruction.

A comprehensive nasal exam can determine whether one of these is the cause of your nasal breathing problem, or if an underlying medical condition may be the cause. Then we can address the situation as needed. There’s often a simple fix that can restore healthy breathing and significantly improve your quality of life.

Find relief with our Athens ENT

The first step to treatment will be to determine the cause of your breathing problems.

The most common dysfunctions that lead to nasal obstruction are inferior turbinate hypertrophy, deviated septum, and external nasal valve collapse. But there are numerous other causes of nasal obstruction such as nasal septal perforation, chronic sinusitis and allergic rhinitis.

Needless to say, diagnosing the root problem can sometimes be involved. But we’ll commit as much time as it takes to help you get relief. Because nothing’s more fundamental than the ability to breathe.

If you, or someone you love, has ongoing problems with nasal obstruction, please make an appointment right away.

What are the inferior turbinates?

The nasal structures responsible for creating the nasal cycle are called inferior turbinates.

The inferior turbinates swell with extra blood flow to constrict the nasal passage. This is called the “hypertrophied” state. Then they shrink back to normal size to increase airflow.

The inferior turbinates sometimes become unnaturally swollen by gravity or a common cold. That’s why your pillow-side nostril may become blocked if you sleep on your side at night. And it’s why inflammation in the nose, caused by a cold, can make breathing difficult.

Some people are also predisposed to the hypertrophied state. In other words, they just have large turbinates. As a result, even the natural swelling of the nasal cycle, restricts too much airflow. We call this inferior turbinate hypertrophy.

Can inferior turbinate hypertrophy be fixed?

When turbinate hypertrophy is causing problems there are a several things that can help.

If medicines don’t provide substantial relief to nasal obstruction, surgical procedures are another option that can reduce the size of the nasal structures blocking airflow.

Surgical procedures range from a minimally invasive method of shrinking soft tissues, to removing portions of soft tissue and bone, to removal of the entire interior turbinate (in extreme circumstances).

What can be done about a deviated septum?

Sometimes nasal sprays can be tried to see if shrinking the nasal lining can help. However if it’s truly the deviated septum causing the trouble, nasal sprays rarely make a difference.

Surgery to correct a deviated nasal septum is called a septoplasty. An incision is made in the mucosal lining in front of the deviated portion of the septum. Then the deviated cartilage or bone is removed to straighten the structure and relieve the obstruction.

Depending on where the deviation occurs, a rhinoplasty technique (also known as plastic surgery) may also be required to reconstruct the supporting mechanism at the tip of the nose.

One simple treatment for nasal valve collapse is to wear Breathe Right strips on the outside of the nose. You may have seen athletes wearing these thin strips across the bridge of the nose to help them breathe better during games. Many people wear these at night, or even during the day to help with breathing.

Stents or splints worn inside the nose serve the same function, but are less visible. They are often called “nasal cones” or “nasal springs”, if you’re interested in buying a pair to try.

Wearing an external or internal support will likely take some getting used to. Some people never adjust to having a foreign object on or in their noses. For them, surgery is another option.

Nasal valve splinting surgeries add rigidity to the external valve region with either scar tissue or sutures. These are simple procedures that can be very helpful and performed under local anesthesia.

Rhinoplasty techniques (also known as plastic surgery) are another option. These add cartilage to the nasal valve region and are very effective in preventing collapse. But the procedures are more involved and typically require more recovery time.

Why is it important to breathe through the nose?

The nose is like a heating and air conditioning unit for the lungs.

Frequently, the air we inhale isn’t optimal for breathing. It can be dirty with dust and other particulate matter. Or it can be to dry or too cool for adequate exchange of oxygen and carbon dioxide in the lungs.

The tissue of the nose—called the mucosa and the submucosa–receives an extraordinarily high volume of blood flow. (That’s why even a tiny scrape can cause a gushing nosebleed.)

It’s this high volume of blood flow that allows heat and moisture to quickly transfer to the air we inhale. By the time it reaches the back of the throat it’s essentially at body temperature. And the added moisture keeps the lungs from drying out, which could lead to excessive secretions and phlegm.

Plus, don’t forget about the benefit of smell. It’s one of the five senses with which we enjoy life (ahh, fresh-baked bread…) and protect ourselves (Is that smoke?). Plus, smell contributes to our sense of taste.

In short, if aren’t using your nose, you aren’t living as fully as you could be!

Does your breathing trouble alternate from one nostril to the other?

It’s natural for breathing to shift gently from one nostril to the other throughout the day.

In a process called the nasal cycle, one nostril slightly constricts while the other opens up. About every 90 minutes, the sides alternate so more air flows through the other nostril.

Science doesn’t know for certain, but the purpose of the nasal cycle is probably to allow the mucous tissues within the nose to periodically recharge with warmth and moisture.

Do you always have a harder time breathing on one particular side?

A deviated nasal septum can cause consistent breathing trouble in one nostril.

The nasal septum is a delicate structure of bone and cartilage that divides the nasal cavity into right and left sides. About 80 percent of people have a nasal septum that is slightly to one side or the other. It can be caused by genetics or by a trauma—like getting hit in the nose with a basketball, or simply passing through the birth canal as a baby.

For the vast majority of people, a deviated septum causes no breathing troubles. But other people aren’t so lucky.

The nasal cavity is an intricate, 3D structure. And even a slight septum deviation can cause significant breathing problems in some cases.

Is it equally difficult to breathe on both sides of your nose?

If you feel equally restricted in both nostrils when you take a big breath, you may suffer from external nasal valve collapse.

Everyone has a certain amount of external nasal valve collapse. It can be observed simply by watching in the mirror when you take a big breath through the nose. Air pressure—called the Venturi effect—causes the nostrils to collapse inwards. When people have weak or floppy cartilage supporting the external nose, this collapse can cause obstruction even when breathing softly.

Cartilage support is genetically determined and is variable in different races. Also as we age, the rigidity of the nasal cartilage decreases, and the weight of the soft tissue of the external nose increases. This increases the likelihood of external nasal valve collapse among the elderly.